Isabel Allende "The Soul of a Woman" 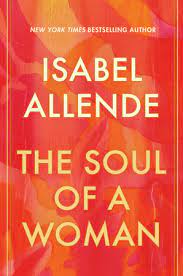 ---
I didn’t know a soul. I was dressed like a hippie and was totally out of place, but she calmed me with just one sentence: “Here nobody knows more than you; we all improvise.” That reminded me of Uncle Ramón’s advice: Remember that everybody is more scared than you are.

---
Mae West, the black-and-white-movie diva, said that one is never too old to get younger. Love rejuvenates, there’s no doubt about that. I am enjoying a new love and maybe that’s why I feel as healthy and enthusiastic as if I were thirty years younger. In my case it’s an excess of endorphins, the happiness hormones. It seems that we all feel younger than our chronological years and are surprised when the calendar reminds us that another year or another decade has gone by. Time slips by quickly. I tend to forget my age so completely that I am baffled when I am offered a seat on the bus. I feel young because I can still roll on the floor with the dogs, sneak out for ice cream, remember what I had for breakfast, and make love laughing. But to be prudent, I don’t test my abilities and I quietly accept my limitations.

---
With age we suffer more losses; it’s only natural. We lose people, pets, places, and the unstoppable energy of youth.

---
I met Sophia (Loren) at the Olympic Winter Games in Italy in 2006 when we and six other women carried the Olympic flag through the stadium. Sophia stood out like a peacock among chickens. I couldn’t take my eyes off her. She had been the sex symbol of an era, and at seventy-something was still stunning. What is the secret of her invincible attraction and youth? In a TV interview she said the secret was happiness, and that all one can see, she owes to spaghetti. In another interview she added that the trick was to maintain good posture. “I am always straight and I don’t make old people noises, no panting, complaining, coughing, or shuffling.” Attitude is her mantra. I follow Sophia’s advice about posture, but not that nonsense about spaghetti. I tried it once and gained ten pounds.

---
In the past, adulthood arrived at twenty, middle age at forty, and old age at fifty. Today adolescence lasts until past thirty or forty, maturity comes around sixty, and old age starts at eighty. This is the baby boomers’ achievement. Over the last half century they have redefined many cultural aspects for their convenience.

---
I would like to have Sophia Loren’s full breasts and long legs, but if given a choice, I prefer the gifts of several good witches I know: purpose, compassion, and good humor.

---
“My biggest mistake was to retire. I was eighty but that’s just a number. I could have gone on working another ten years,” he told me once. I didn’t find it in me to remind him that at eighty he needed help to tie his shoes, but I agree that his slow downward slope began when he retired. This has strengthened my decision to be active forever and use every brain cell and soul spark so there will be nothing left when I go. I am not going to retire, I am going to renovate. I am not willing to be cautious. According to Julia Child, the celebrity chef, the secret of her longevity was red meat and gin. My excesses are different but, like Julia, I will not give them up. My mother used to say that the only regrets in our old age are the sins we didn’t commit and the things we didn’t buy.

---
Young people ask me often how is it to love at my age. They are amazed that I can still speak in full sentences, let alone fall in love. Well, it’s the same as falling in love at seventeen, as Violeta Parra wrote, but with a greater sense of urgency. Roger and I have only a few years ahead of us. Years sneak by quickly, on tiptoe, scoffing, and suddenly they give us a fright in the mirror or smack us on the back. Every minute is precious and we can’t waste it on misunderstanding, impatience, jealousy, pettiness, or the other silly stuff that soils relationships. In truth this formula can be applied at any age because it’s always the case that our days are limited. If I had lived this way before, maybe I would not have two divorces behind me.